Dekha Aik Khawab To Yeh SilSilay Hue" "Door Tak Nigahoun Main Thay Gul Khilay Hue" Yes that is right but this time the only difference is that its not Netherland but Srinagar Kashmir blooming with 1.5 Million Tulips. To relive that Yash Chopra Movie romance come & visit the largest Tulip Garden in Asia during Kashmir Tulip Festival 2022.

Mesmerizing people at the foot hills of Zabarwan Mountain Range In Srinagar. The Asia's largest tulip Garden is must to see tour destination in the heart of Srinagar city during Kashmir Tulip Festival 2022.

Kashmir valley is known for its amazing natural beauty and it has many meadows and valleys to mesmerize anyone. Blessed by God with tremendous potential for tourism in Kashmir valley and Srinagar city in particular is one the best tour destinations in India.

The city of Srinagar has remained a darling to most of the rulers of this heavenly valley of Kashmir. Being the center of the attraction and the capital city of Jammu and Kashmir state this city has many famous tourist attractions to visit.

Over looking the world famous Dal Lake in the foot hills of Zabarwan mountains, Srinagar tulip garden is located at distance of 8Kms from Lal Chowk (The Main City Center) of Srinagar, 18 kms from  Srinagar International Airport and 17 kms from Srinagar Railway Station. 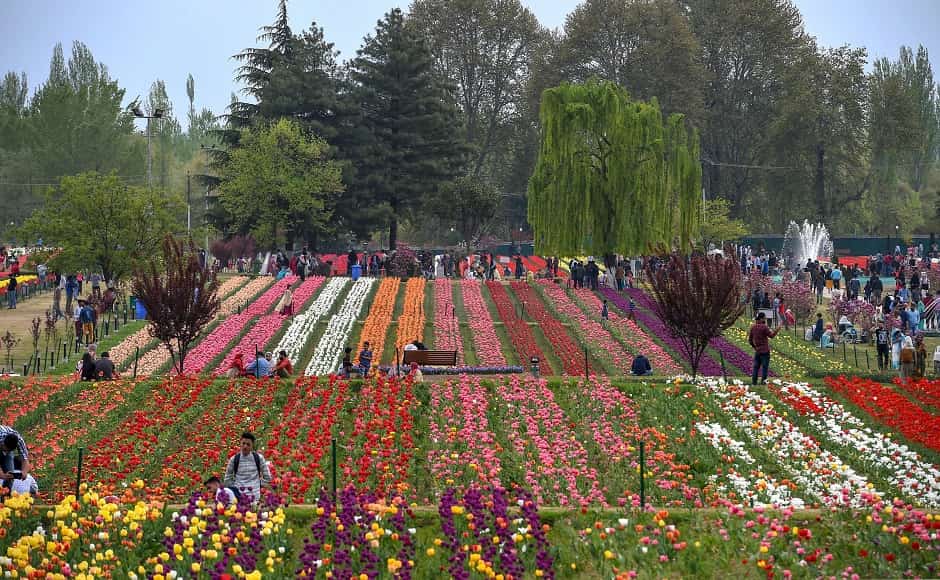 Spread across about 30 hectors the garden is the largest Tulip garden in Asia. Blooming with more than 1.5 million tulips of about 48 varieties. The Tulip garden in Srinagar also hosts many other species of flowers like ranunculus, hyacinths and daffodils and a very rare tree called Tulip Tree which also blooms at the same time.

Tulips are considered most delicate and sensitive flowers and can grow in a perticular climatic conditions. The climate of Kashmir valley in the end of March is perfect  for these flowers  to bloom and they are among the first blooming flowers in the Valley.

It was inaugurated by then Chief Minister of the Jammu and Kashmir state Ghulam Nabi Azad in 2007 the tulip garden was built to promote tourism and floriculture in Kashmir valley.

This seven terraced garden will be having a water channel and more green areas to let the visitors relish their best memories in garden.

The garden has many sections and each section is designed by gardeners to make it unique. Every section hosts different varieties of Tulips like strong gold, margaritas, candela, kung fu, early harvest, ile de france, etc.

How to Reach Srinagar Tulip Garden

Kashmir Tulip Garden is located at distance of 18kms from  Srinagar International Airport, 17kms from Srinagar Railway Station and 8Kms from Lal Chowk (The Main City Center) of Srinagar,.

Regular Bus service is available on the route from Lal Chowk Srinagar at a fare of Rs. 10 per passenger.

The nearest bus stop is on the Boulevard road near Cheshma Shahi crossing at a walking distance of about 900mts from the Tulip Garden. 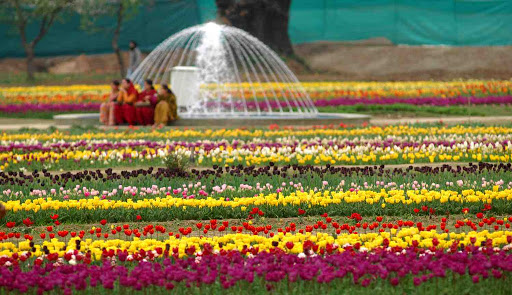 Opening hours: The garden remains open from 7:00am to 7:30pm 7 days a week. Entry Fee is Rs.50 per adult Rs.25 Per Child. Most of the people visit garden between 01:00pm to 06:00pm. Tulip Garden in Srinagar Kashmir will be opened for public from 23rd march in 2022. Director Floriculture department, Farooq Ahmad Rather on Thursday said that tulip garden will be thrown open for public from March 23 onwards

Bollywood is also in love with Kashmir and Srinagar Tulip Garden. Salman Khan has shot his movie Bajrangi Bhaijan in Kashmir.  John Abraham starrer ‘RAW’, Manmarziyaan which featured Abhishek Bachan were also shot in the Valley.

A number of films have been shot in the state in the resent past including Neeraj Pandey’s Aiyaary (starring Sidharth Malhotra, Manoj Bajpayee, and Rakul Preet Singh), Meghna Gulzar’s Raazi (with Alia Bhatt and Vicky Kaushal in the lead), to Divya Dutta-starrer Gul Makai (based on the young Pakistani activist and Nobel Peace Prize-winner Malala Yousafzai), to Imtiaz Ali’s brother Sajid Ali’s Laila Majnu, with newcomers Avinash Tiwary and Deepthi.

Govt of Jammu and Kashmir organizes Kashmir Tulip festival every year to celebrate the onset of tourism season in Kashmir in the month of April as part of Bahaar-e-Kashmir event in Srinagar.

This festival is intended to bring more tourists to valley of Kashmir and many programmes like cultural events , music shows, food festival and travel agents conferences are organized by the government during this period.

Every year tulip garden is opened for public in the month of March when the tulips start to bloom in the garden. The Garden remains open till end of April and then its closed for public. According to commissioner/secretary of the Floriculture department Sheikh Fayaz because of comparatively better weather this season, the tulip garden is to be be thrown open earlier than usual this year 2022.

The best time to visit Srinagar Tulip Garden and see the tulips in full bloom is from 1st to 3rd week of April. In  2019 2.59 Lakh people visited this garden including foreign and domestic tourists. Which generated a revenue of Rs 58 lakh for the department of Tourism Govt.of Jammu and Kashmir. 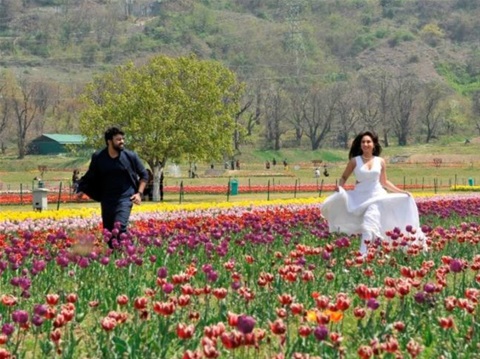 Kashmir Tulip Festival is celebrated for 20 days with the largest bloom of tulips and other flowers in the Garden. If the climate remains cool below 20 degree centigrade the festival is extended accordingly.

There are many other tourist attractions in close vicinity to the famous tulip garden in Srinagar that you can visit on your tour to Siraj Bagh.

What You Get? Fill You Requirements

Indeed Holidays provides special tulip festival tour packages in Srinagar Kashmir, If you intend to visit Srinagar Tulip Garden in 2022 for Kashmir tulip festival, You can book customized trip packages from Indeed holidays specially designed for Kashmir tulip festival 2022. Our packages include all the popular tour places around Tulip garden Srinagar Like Mughal Gardens, Cheshama Shahi, Dal lake, Shanker Acharaya Temple, HazratBal Shrine etc besides that you will also visit Srinagar city, Gulmarg, Pahalgam and Sonmarg etc.our packages are ready to be customized by expert tour planners to suit any budget any holiday plan. Bring you family & friends for a Tulip Treat in 2022 and we will make it memorable trip for you.

Create your own holiday tour plan

Your favourite mode of communiaction

Checkout other popular tags in this category